We thought of conducting a comparative performance study for three solutions that cover the four basic functions of electronic messaging: message receiving, their delivery to the user’s mailboxes, message storage and user accessing stored emails. Two usage scenarios were considered: business and ISP.

The three tested solutions are:

The tests consisted in sending messages with a predetermined size to the servers and checking their acceptance in the users’ mailboxes.

The large number of spam messages from the total traffic of received email messages (estimated by Radicati, in 2007, at 72% of all traffic) generates frequent periods of intensive server usage. To verify the servers’ ability to respond in overload conditions, their response time to requests on 1, 2, 4 and 8 parallel connections was tested.

After running these tests, we obtained the following results: 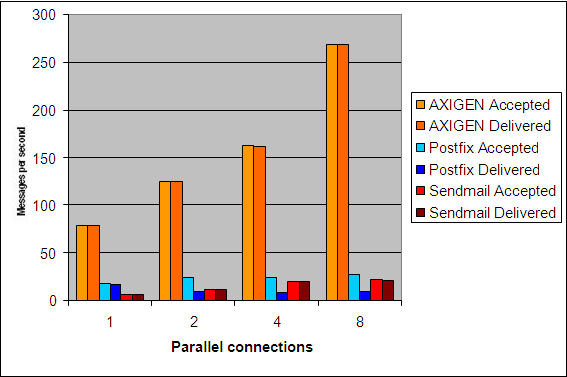 The following graphic details the results for the Postfix solution (at a corresponding scale to observe the evolution of the examined indicator): 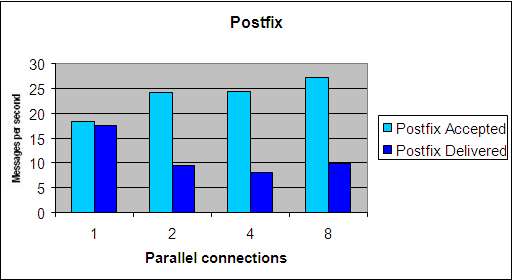 We notice that, for Postfix, once we increase the number of parallel connections, the difference between the number of accepted and delivered messages is significantly greater, the latter being much smaller. It can be concluded that a big part of the processing power is used to accept messages; sadly, the delivery is affected by this behavior, the immediate effect being the constant message queue increase, which finally causes a server blockage. Compared to Sendmail, Postfix works a little better in the case of a single connection, but the performance balance switches in favor of Sendmail as the number of parallel connections is increased.

Unlike the first two solutions, AXIGEN maintains a balance between the number of received and delivered messages and its performance highly increases when new parallel connections are being added, working almost 13 times better than Sendmail and Postfix at 8 parallel connections.

To conclude, even if in normal traffic situations a 7-20 messages/second performance is satisfactory and the Sendmail or Postfix solutions behave acceptably, during peak traffic periods, such as virus outbreak situations, spam attacks, when sending large numbers of messages (e.g emails to large distribution lists) or in case of server attacks, AXIGEN proves to be much more reliable.