In order to provide extensive email protection, Axigen has been built to support the best AntiVirus & AntiSpam apps through specific plug-ins. The third party app can either be installed on the same machine with Axigen or on a different one, for increased speed of the scanning process.

The Axigen Messaging Solution provides two main methods of integrating third party scanners with the processing engine and message filtering. The scanning process is performed during the processing stage of the messages in both cases, after multiple SMTP checks, such as DNS, GeoIP and SPF, are applied.

With more than one AV running simultaneously, Axigen provides customized security levels per domain. Thus you can ensure, for instance, a higher SPAM protection to the management department and a faster delivery to the sales department.

Also known as Axigen direct connectors, these filters apply once the SPAM and malicious messages have already been thinned-out by the previous SMTP level filters. They provide the most performance-effective method of integration by closely communicating with the third party scanners installed on the system.

The scanners receive instructions from the Axigen Messaging Solution through these filters and once the scan is complete, provide the relevant results back to the server. Using the results, Axigen decides the fate of the messages, including dropping or accepting the message. These actions can be fully customized to fit the requirements of any email traffic regulations.

The Axigen Messaging Solution provides custom-built and tested connectors for the following list of scanners, reducing the configuration required for the integration process to a minimum: 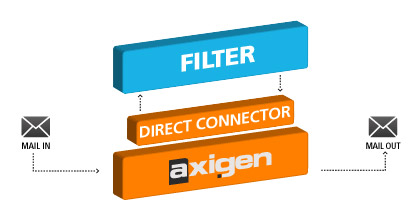 The milter is actually a protocol that was originally designed for open-source mail transfer agents, but is currently being adopted as the new standard in the industry by a large number of email-related software vendors. Through this standard approach, any scanner that supports the milter can be integrated with the Axigen Messaging Solution. The result of this feature is an extensive list of scanners that can be integrated with it, thus expanding Aixgen's ability to fit the needs and requirements of the environment it's being deployed in.

The complete list of scanners supported and tested through the milter integration method follows:

In addition to the above-mentioned list, other scanners that support the standard can easily be integrated with the Axigen Messaging Solution. One of these, although not a scanning software in itself, is the MailArchiva email archiving and storing solution. Indeed, the milter protocol does provide close to limitless integration, compatibility and interoperability between the mail server and third party, related, software packages. 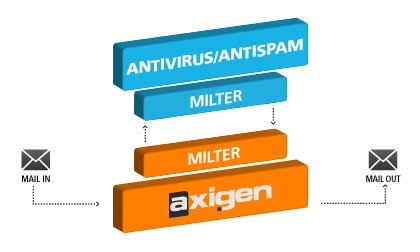