You are using an older browser, which will result in a bad experience. Upgrade your browser
Documentation
Axigen Administration via WebAdmin
Global Settings
General Server Options
Default Localization Settings

Starting with Axigen X2, admins have the option to configure which languages will be available for the WebMail service.

If you allow only one language, the language drop-down in the WebMail will not be shown anymore.

The languages marked with * are only available in the Standard WebMail interface.

Admins can also configure a default webmail language. The selected language will also be used when connecting via IMAP, in order to localize the special folder names in compatible IMAP clients. The languages marked with * are only available in the Standard WebMail interface. If one of them is selected, the Ajax WebMail interface will be displayed in English instead.

The automatic detection functionality applies to WebMail and uses the User's computer Operating System and Browsers settings for selecting the language in which the WebMail login page is initially displayed.

Configure the default date and time settings for that will apply for each newly created domain or account.

These defaults can be overridden at domain level, thus allowing you to set specific default values for each domain.

Changing any of these values will not have any effect on existing domains and accounts. 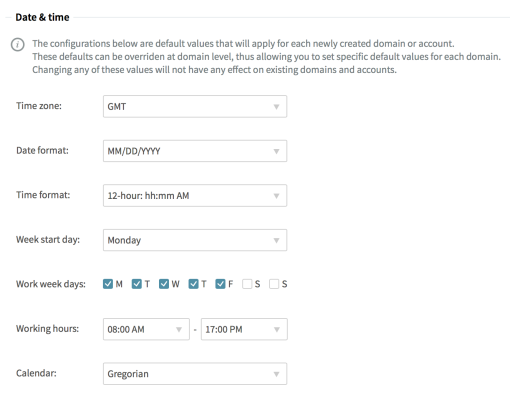